Born in December 1916 and ascended to Heaven in October 2001, Howard Finster was one of the most unique American artists of the 20th century. A central figure in the movement called “outsider art”, representing self-taught artists with few or no connections to the bigger artistic world. A fiery backwoods Baptist preacher and visionary, deeply spiritual in his life and his artistic conception, Finster first burst into the national public eye through his unlikely connections to the world of college rock.

He was born in Valley Head, Alabama, one of fourteen kids, and claimed to have had his first vision at age three, when he saw his late sister emerge from the sky in a white gown and tell him he would be a visionary. His education ended in the sixth grade, when he went to work to help support the family. In 1930 Finster received the Holy Spirit at a Baptist revival, and three years later he became a passionate preacher of the Gospel. He pastured at churches in Rock Bridge and Fort Payne, Alabama, and took up art in the 1940s as an avocation. When he wasn’t pastoring, he worked as a bicycle repairman.

In 1961 Finster moved to Pennville and the Howard Finster Vision House Museum. While his Christian faith was always evident in much of Finster’s art, it was not until 1976 that his art evolved into a deeper method of ministry. Guided by a vision of a face on his fingertip, he began creating his unique form of sacred art almost exclusively. Finster painted primitive images of angels, people and buildings, captioning them with Biblical quotes or sermon snippets. Besides flat, rectangular works, he would often paint three-dimensional sculptures assembled from cut wood. As before, he completely covered the surface of his pieces with paint and text. 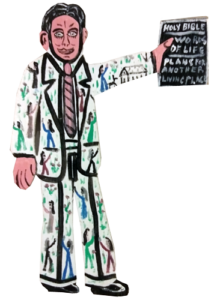 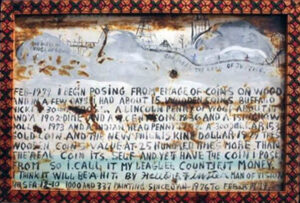 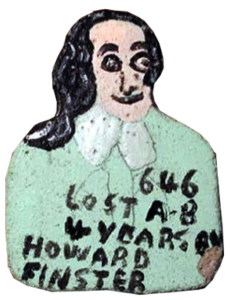 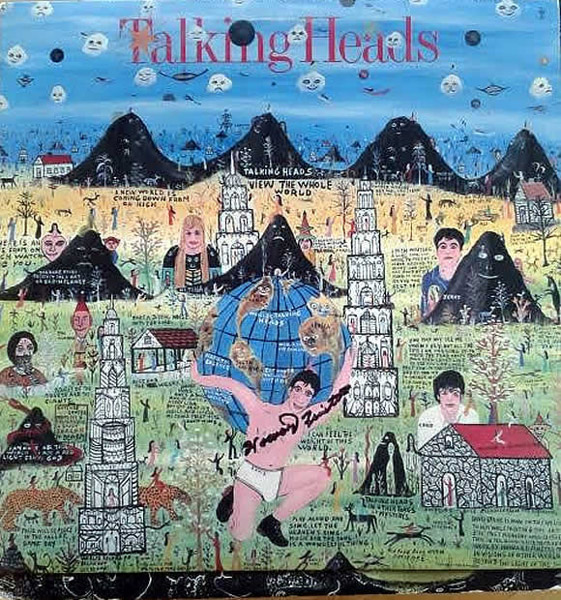 In 1985, Finster was contacted by David Byrne of Talking Heads for a similar commission. Byrne had started the band while a student at Rhode Island School of Design in the 1970s and had long been interested in American folk art. In Finster he saw the ideal American visionary artist, combining a nationalist spirit with religious fervor and bold use of color. The cover that Finster created for Talking Heads’ Little Creatures (Sire Records, 1985, below) was a surrealist wonderland featuring portraits of each band member amidst smiling clouds and black mountains, towers, churches, and Biblical notions like “A new world is coming down from on high.” In the center of it all was a portrait of David Byrne, clad in tighty-whities and black shoes, holding the globe upon his back like Atlas. The art seemed well-suited to oddball, almost otherworldly songs like “And She Was”, “Perfect World” and “Road to Nowhere”. Rolling Stone Magazine named it the top album cover of the year.

R.E.M. singer Michael Stipe first came across Finster’s work on a visit to a museum. In 1984 Stipe asked the artist to collaborate with him on cover art for the band’s album Reckoning (I.R.S. Records). The cover, bears much of Finster’s cartoonishness, but no scriptural references, which was highly unusual by the mid-80s. A snake in tones of blue, green and purple (with the song titles at intervals) weaves over a black-and-white background of buildings, faces and other doodles. While it was not really representative of Finster’s usual work, the artist got a lot of publicity as Stipe and his bandmates touted Finster’s art in multiple interviews. The band filmed their video for “Radio Free Europe” at Paradise Garden, and Finster himself briefly appeared in the video for “Shiny Happy People”. 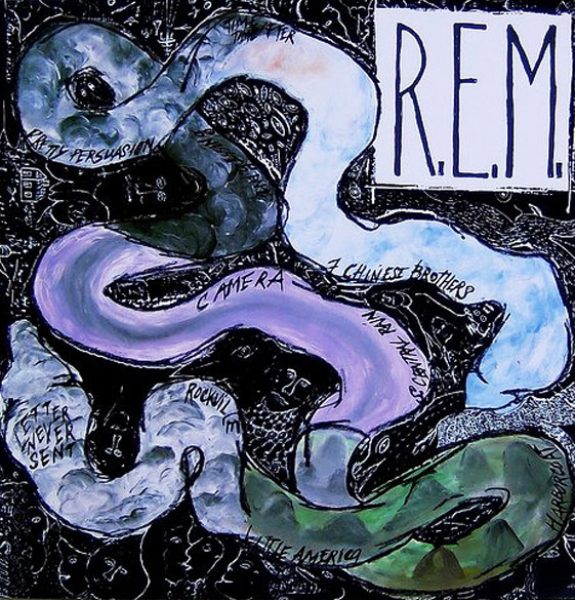 Saving a Folk Artist’s Paradise, Lost to Weeds and Ruin, Is a Tangled Affair

R.E.M might have broken up, but Finster lives on in Long Grove!

"Howard Finster was nicer to me than anybody but my Mama, and restoring the Howard Finster Vision House Museum is the least I can do for my humble country, preacher, mentor."
David Leonardis