Exhibition Opening Friday, Nov. 18th 2022 with a reception 3-5pm. On Saturday,
Nov. 19th at 10am a presentation by David Leonardis about Howard Finster and what it
takes to start your own Museum. followed by a “Make Your Own Finster” workshop until
noon.

“I remember seeing an entire wall of Howard Finster pieces for the first time like it was yesterday. It was actually 30 years ago. Howard Finster’s ability to blend the icons of popular culture and the icons of Christianity were very compelling then and they still are to this day.” David Leonardis

Rev. Howard Finster is widely known as “The Grandfather of Contemporary American Folk Art.” Starting out as a humble country preacher with a day job as a bicycle mechanic, Howard’s recognition as the nation’s most well known “Visionary Folk artist” brought him acclaim during his lifetime, including exhibits in the National Museum of Art in Washington DC, The Library of Congress and album cover art for popular musical artists such as The Talking Heads and R.E.M. He is still the most famous citizen of his home of Pennville/Summerville, Ga where the “Paradise Garden,” a city block sized sculptural wonderland which Howard built by hand is located. The original entrance to the Paradise Gardens is now the Howard Finster Vision House Museum.

Howard is widely known to have had his vision to paint Sacred Art while working on a bicycle. Howard noticed that a face had formed in a paint smudge on his finger and it told him to “Paint Sacred Art.” Having doubts that only professionally trained artists could claim to do such work Howard said, “I can’t do that.” The voice said to him in an ever-increasing tone, “How do you know? How do you know?!! How do you know?!!!”  He then pulled George Washington from his pocket and painted him. Later that night according to the National Register of Historic Places, he was standing on his porch and saw a Vision of a 15-foot-tall Man who he recognized as Elvis Presley. Elvis told him, “You might want to paint that Sacred Art.” Howard Finster went on to make just shy of 47,000 pieces of original art. Most Howard Finster artwork contains messages from Bible scripture as well as revelations from nature, popular cultural figures such as Abe Lincoln and Hank Williams, angelic beings and occasionally even extraterrestrial worlds. Howard’s artwork is vastly colorful and inspiring to thousands of fans and collectors.

The Howard Finster Vision House Museum was founded in 2004 by Chicago art dealer David Leonardis, who coordinated this exhibit. It is the actual home where Howard lived when he had his “Vision from God to paint Sacred Art.” He then began to beautify his backyard into the “Paradise Gardens” which is now a municipal Park owned by Chattooga County, GA located adjacent to the museum. Complementary to his large collection of original Howard Finster art, David Leonardis published 36 signed limited-edition serigraphs, 2 signed photo editions and 2 original silk ties in collaboration with the Reverend Finster. The walls of the HFVHM are completely covered with art and ephemera by or about Howard. “Howard Finster was nicer to me than anybody but my Momma,” says David Leonardis. “Howard built a giant covered walkway within the Paradise Garden to showcase part of his Art Collection. I was inspired to do much the same by restoring Howard’s home and land and filling it with over 400 pieces of art. I think more people should buy land and houses, fill them with art and let them live on as Museums.”

Most of the collection’s works on paper are framed in Howard’s original design wood burned molding made by his Grandson Allen Wilson. In 2010 Leonardis acquired Allen Wilson’s house next to the HFVHM. Leonardis has now assembled his 30 years of collecting contemporary art and photography into a soon to open 2nd Museum on the grounds. Part of David Leonardis’ introductory lecture at 10am on Saturday Nov. 19th will be “What it takes to start your own museum.”

In addition to the 100 framed and original Howard Finster artworks, Cleveland, TN artist and publisher Robin Merritt created with Howard Finster’s permission, a series of large format, museum quality color photographs of sculpture from Howard Finster’s Paradise Garden. At Howard’s suggestion, Robin photographed the garden during June of 1989 while the flowers were in bloom. These photos were made with an antique, tripod mounted portrait camera designed to produce life size prints of family portraits.  This part of the exhibit contains photos of some sculptures by Howard Finster that can no longer be viewed at Paradise Gardens due to natural weathering and the acquisition of pieces by collectors and institutions such as the High Museum of Art in Atlanta. Robin Merritt’s friendship and collaboration with both Howard Finster and David Leonardis led to this touring collection from The Howard Finster Vision House Museum being shown at The Museum Center at 5 Points in Cleveland, TN. You may contact David Leonardis for any further information on this exhibit, including interviews, additional high-res photos for print and digital media or any other inquiries about this exhibit or the history of Howard Finster and The Howard Finster Vision House Museum. www.HowardFinster.com [email protected] (312) 863-9045

The Howard Finster Vision House Museum is happy to offer an opportunity for your Museum, Gallery or exhibit space to rent our touring collection.

We ask that you insure the exhibit and pay for expenses, be responsible for a press release and promote the exhibit.

There are a series of signed limited edition silkscreens that can be offered for sale and a commission of sold pieces is offered.

The John Denton collection is also available. These are the creme de la creme of Howard Finster art works and this exhibit requires crated shipping and a bit more commitment on your part to safeguard, present and curate this exhibit.

Please contact me directly at [email protected] for more information and rental fees. 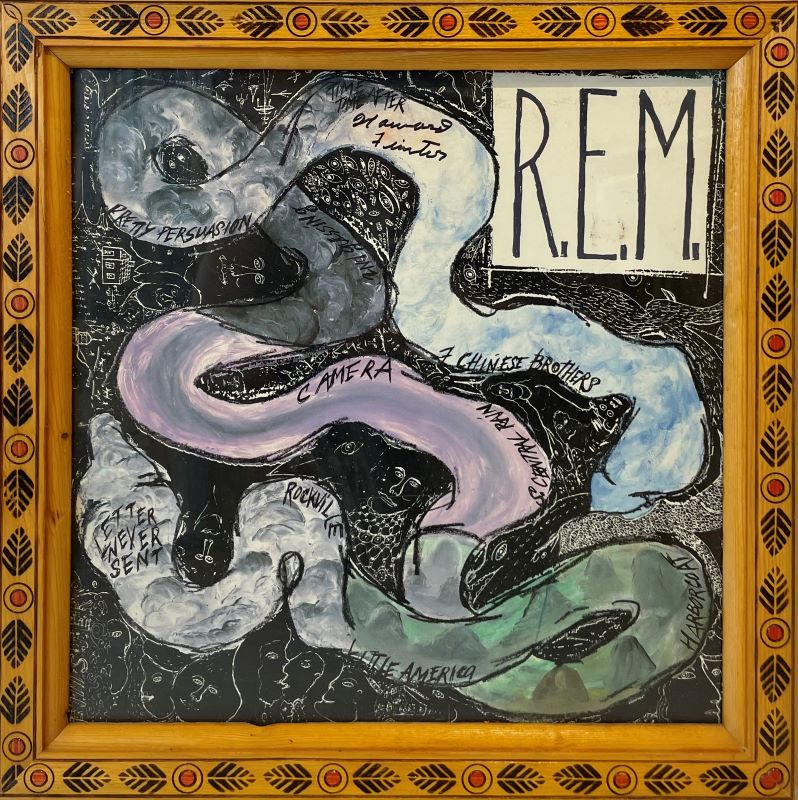 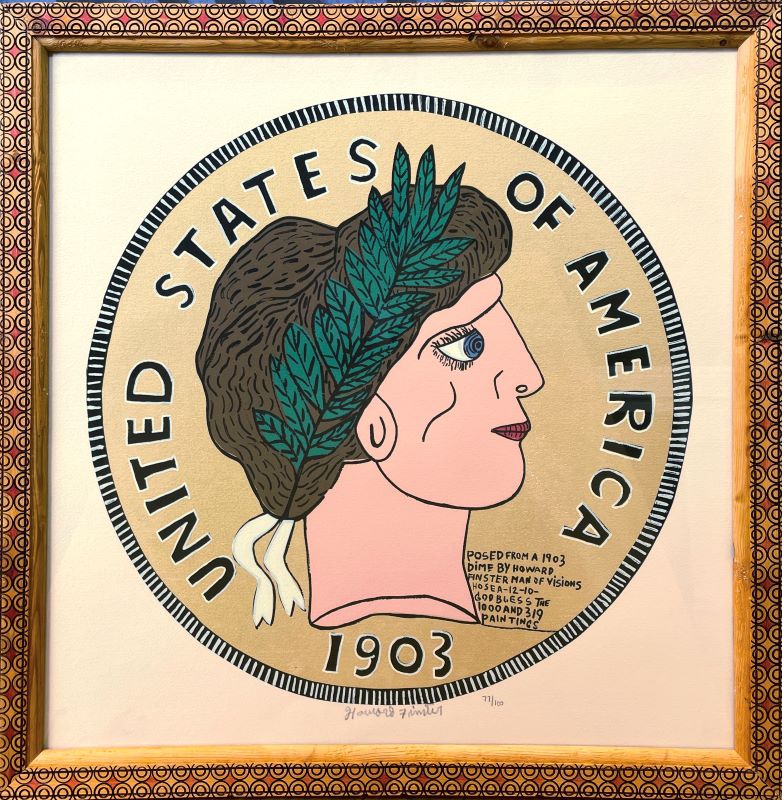 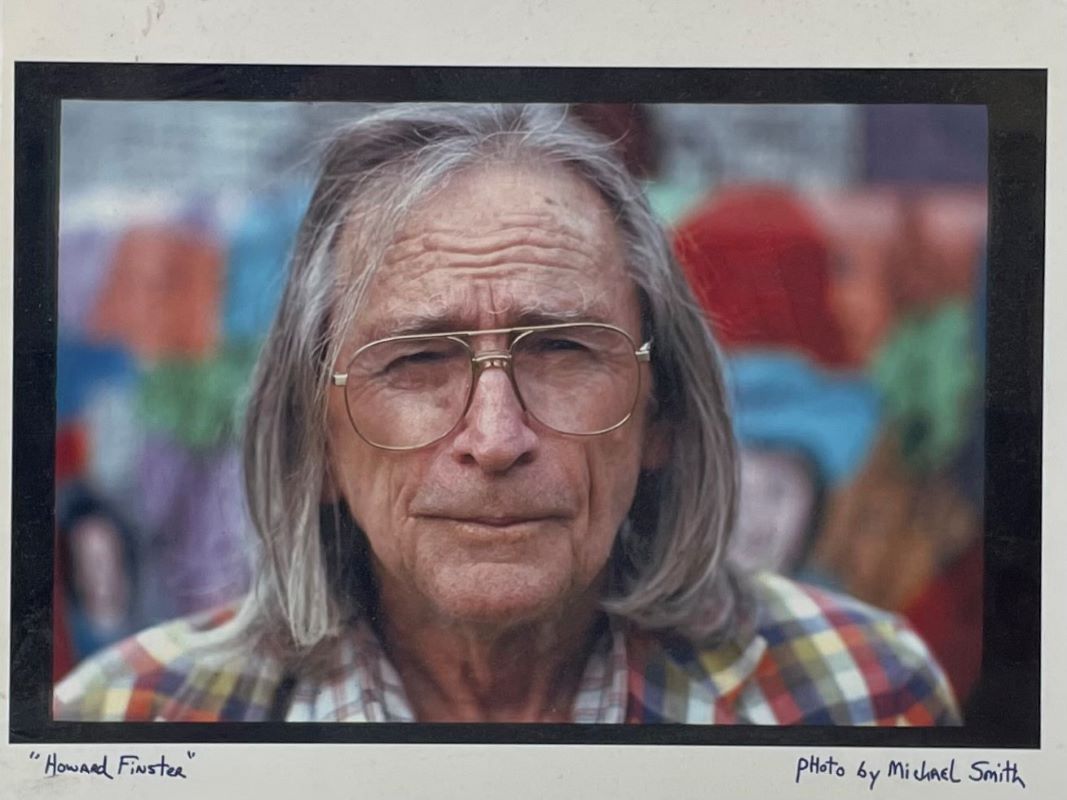 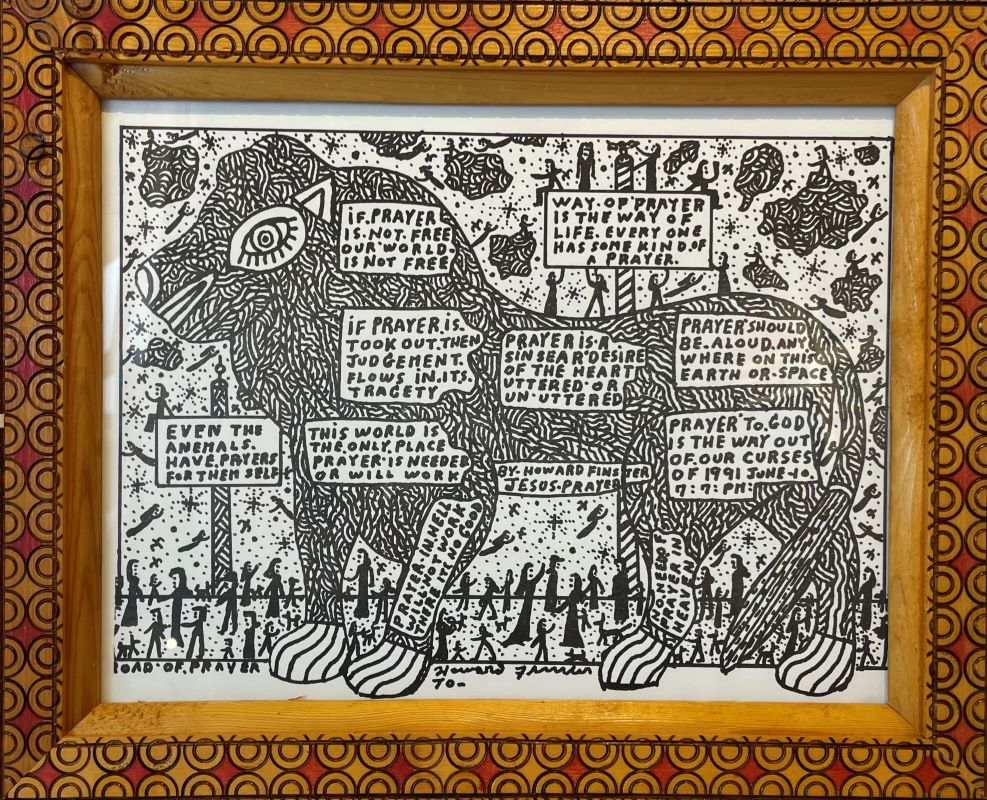 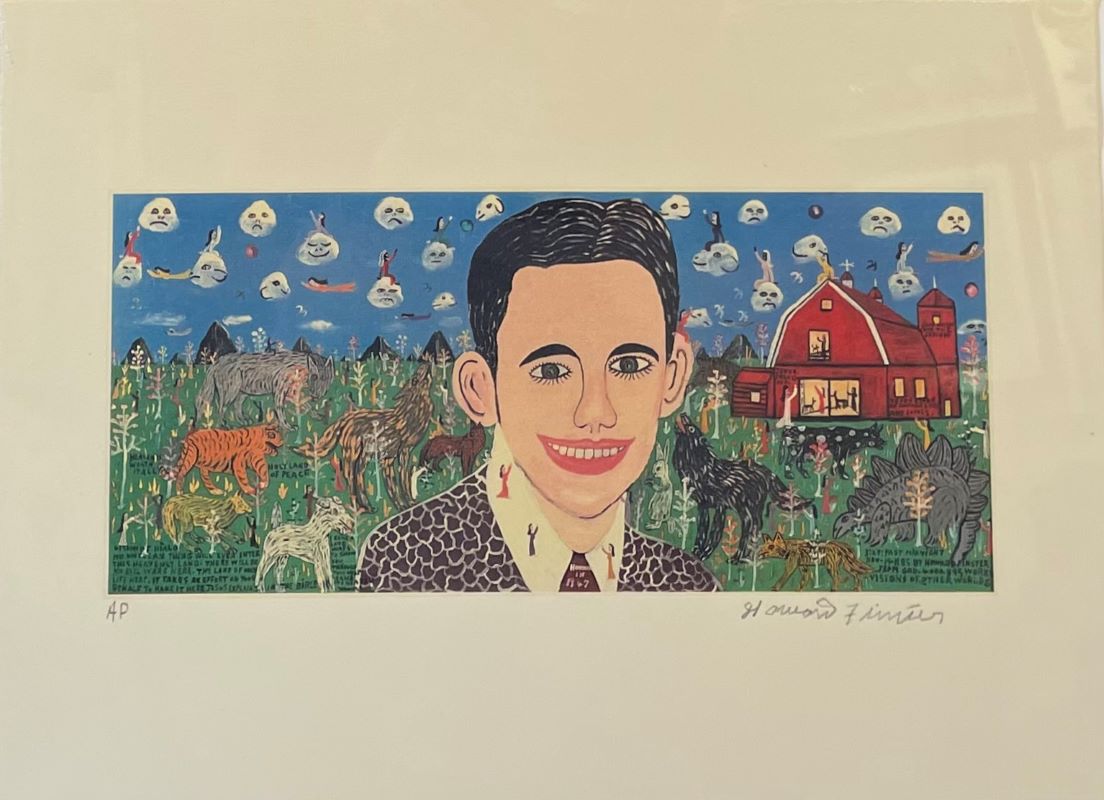 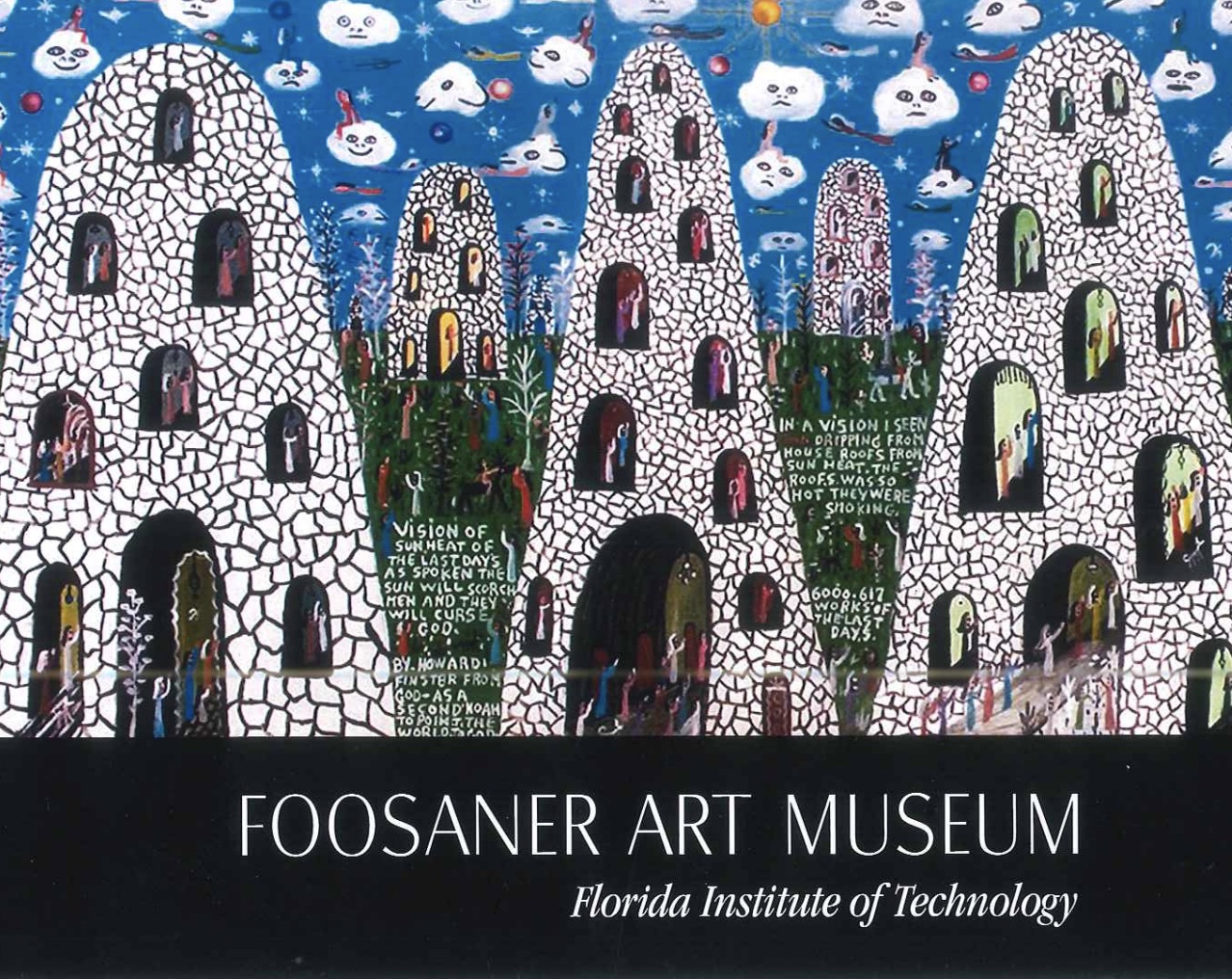 Catalogue for the Fosaner Art Museum 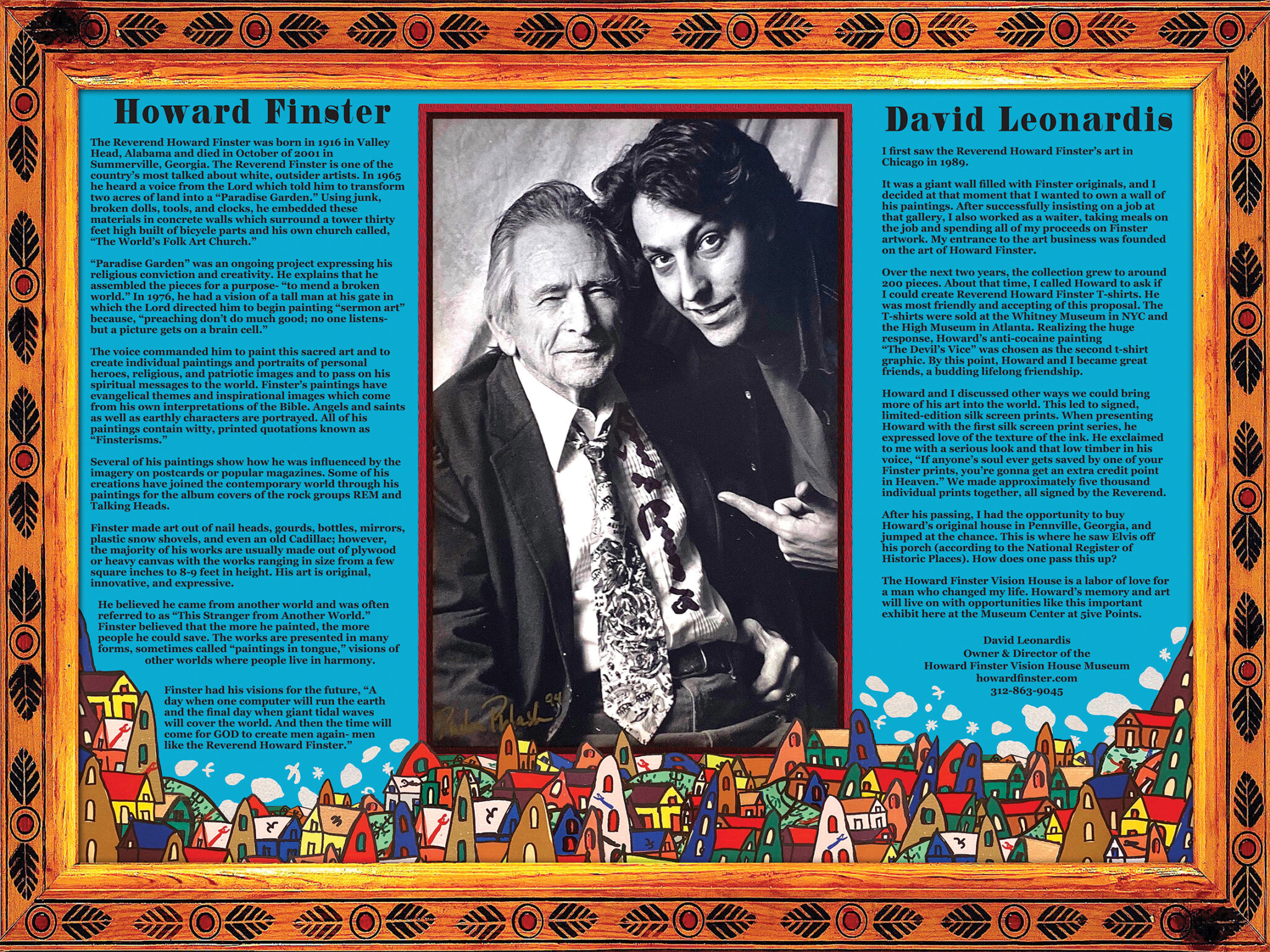 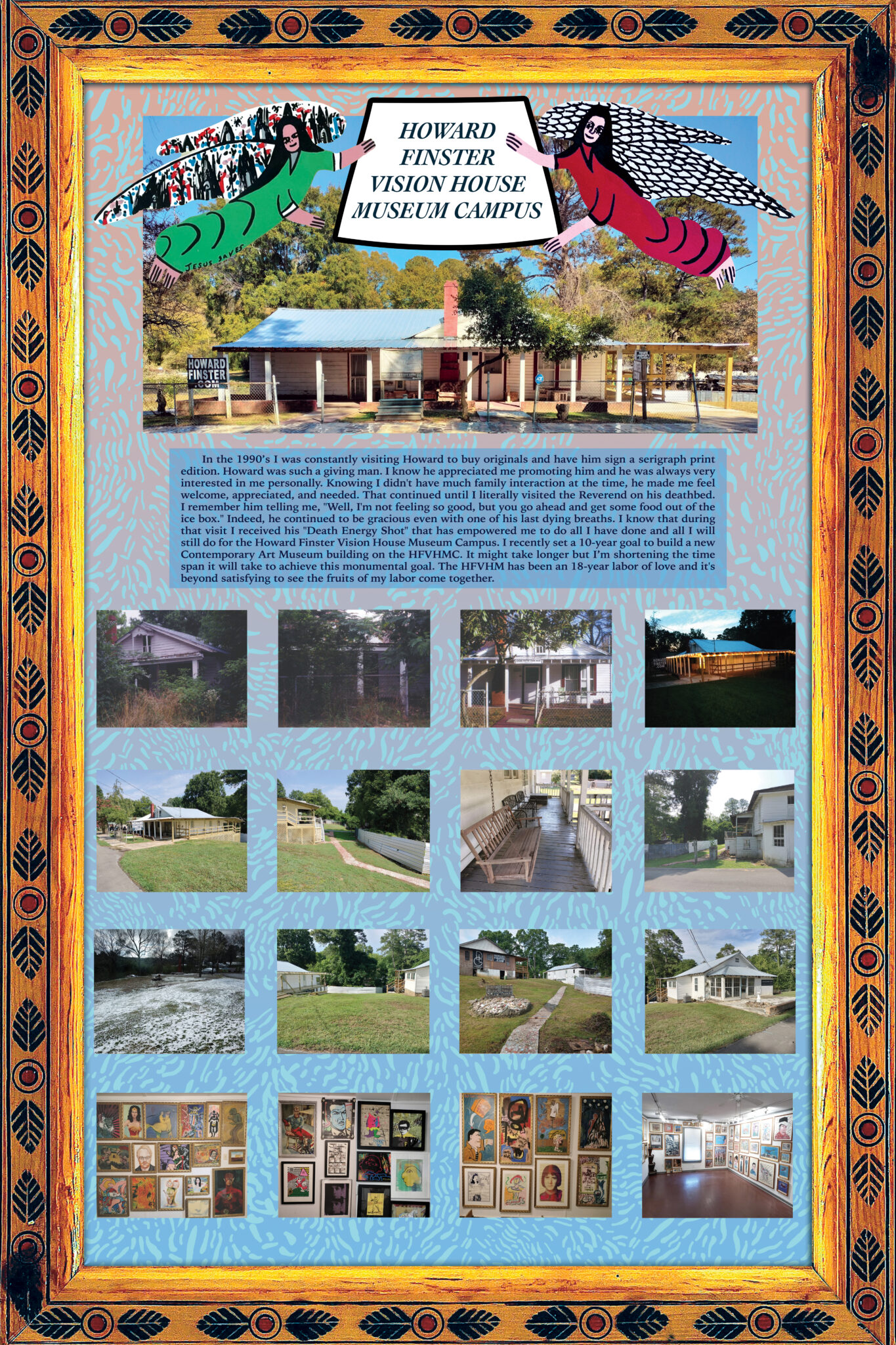 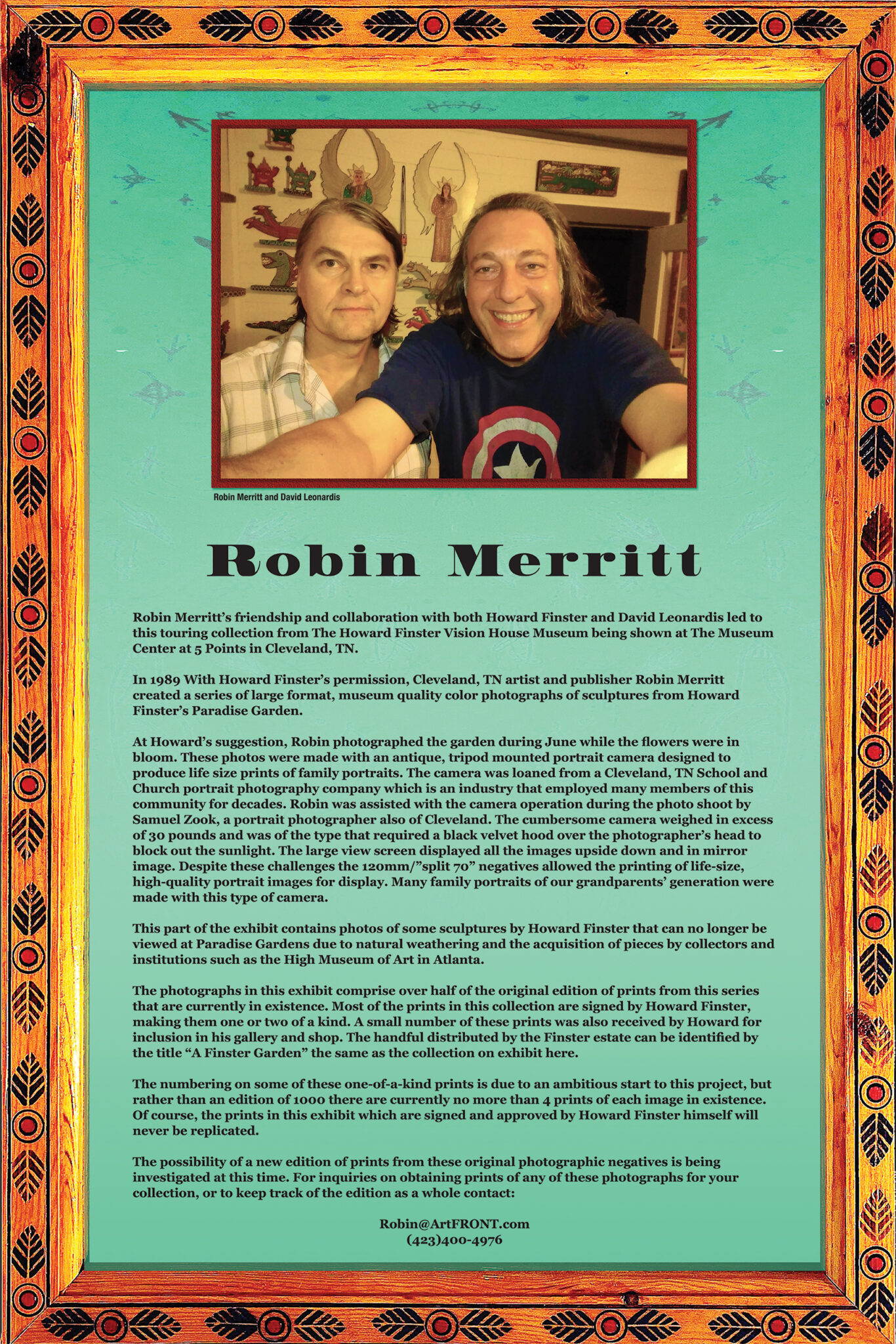 Coffee with the Curator, "Make Your Own Finster" Art Class, PowerPoint Presentation, and Panel Discussion

Radio Interviews with David Leonardis for the Howard Finster Exhibit